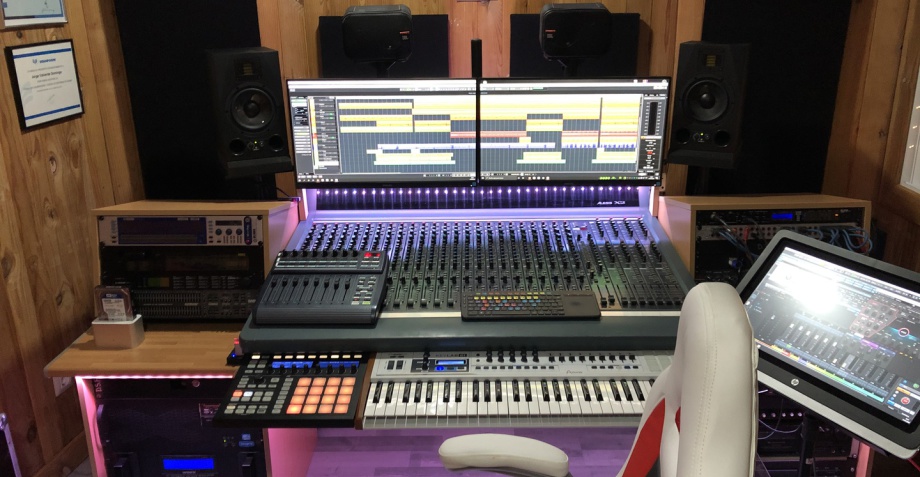 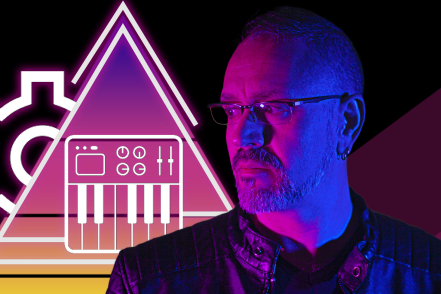 "The Pyramid" The source of ancestral energy.

For all, the mysteries surrounding these majestic monuments of the past are known. Perennials rise above the dunes of the Egyptian desert, or over the lush South American jungles. But what are they really, are they temples?   or Are large electromagnetic energy capacitors?

Little is known about its designers, but if over time it is shown that its function was that of accumulating energy, the theory that the ancient inhabitants of the planet, had a technical knowledge of both or more advanced than we have today, will be demonstrated. 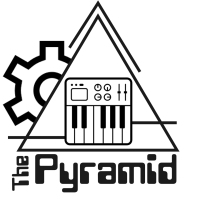 Passionate from my youth for these constructions and the  riddles that surround them, the name "The Pyramid" was born in the early 90s. For me, "The Pyramid" is synonymous with technology wrapped in mystery and mysticism. It is a source of ancestral energy hidden under thick walls waiting to be understood and discovered; And what better way to channel that energy than with the use of the musical instrument technologically more advanced than the human race has been able to create: the synthesizer.

The synthesizer is the demonstration that the human race has the capacity of technological development implemented in its genetic code. In our quest to create, we outline an instrument capable of imitating any other, and with its use we lay the foundation for what is now known as electronic music.

Why a synthesizer? Very simple. Because is a technical musical instrument, sometimes cold, sometimes enigmatic. Capable of generating unreality and at the same time able to immerse the listener in an electronic trance, full of abstract landscapes. Able to make you travel to non-existent places and be  a tool to express your most hidden feelings. That arrogant unreal nature, wrapped in a dense fog of science fiction, is evident in each of my compositions. 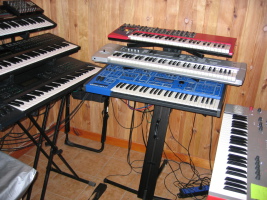 Synthetic music is able to transport you to unreal places with the use of simple notes arranged as a mattress. It is as if those notes excite in our brain frequencies below 14 Hertz, contributing to the creation of Alpha and Theta waves, helping you enter the field of inner meditation and contributing to our mental well-being.

Armed with these instruments and in order to create feelings that do not leave the  listener  indifferent, he is reborn the project he had kept in a drawer since 2009. My first inclusions in music were bathed in the evenings of listening to "new music" (on vinyl, of course) by my older brothers and by my approaches to local pop-rock groups. But I soon realized that I wasn't made to play in formations, my  electronic roots were too deep to compete with guitar riffs.   I started composing, with virtually no musical knowledge and a rather scarce team. I tried to venture into what was then the maelstrom of the music market, consumed by “hits” and "commissions" to enter the charts, without getting any repercussions. Back then I realized that the musical  style I was attracted  towas a minority market, dark and even veryoften abused by the musical business giant. 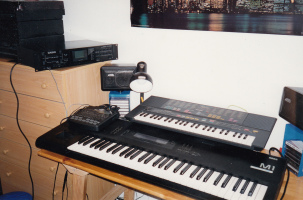 Still, I continued to compose and train both technically and musically, although I must admit that to this day doing things "by ear" remains a late motive in my compositions. But above all, what moved me the most was the need to devour content, listen to music, listen to more and more songs from electronic artists, the way they used their synthesizers to create environments, the use they gave their drum machines to add dynamism to their tracks, the way they acquired their productions and the way they were registered.

I was fascinated, I could spend hours  and hours listening to the same song. At the time the Internet was a science fiction thing, everything was summarized to the vinyls and cassettes that you had at your fingertips: Pink Floyd, E.L.O., Krafwerk, Ultravox, Azul y Negro and a long etcetera. And all this ended up leading to a broad musical culture that over the years has flourished in the form of creativity that I "hope"  will never  fade.

After countless frustrated attempts at self-produced mockups with no media repercussions, I loopedin. My music didn't like it and was doomed to oblivion because it wasn't music to the masses. That's when I realiced all my  efforts  towards what is now my job  occupation: sound. I specialize in the field of sound, both analog and digital, its registration, its treatment, live sound, its physical ins and outs, ... etc. After all, sound and music go hand in hand.

While looking at music through the corner of my eye, I started a process of self-taught   training that concluded with the study in what was then one of the most   renowned technical schools in the sector, "Crash" audiovisual school in Manresa, back in the year 96. There I learned the theory necessary to make professional recordings, recordings like those that I analyzed years ago and admired from summit artists. 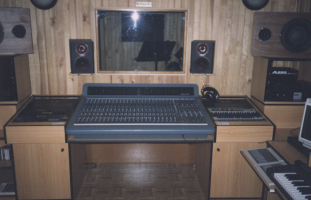 When I returned home with my title under my arm and myriad concerns, I decided to create a    collage, between music, sound, electronic synthesis and technology creating DSP – Studios. A professional recording studio, ahead of its time, digital, MIDI, in which I could unleash my creativity, even if it was made available to other artists. DSP - Studios became my lab, my work desk and my test bench.

Since then and so far, the recording studios sector has gone through a few crises, seeing its number reduced to only those with the most renowned   and the most complete. DSP  went through those crises and ended up succumbing as a trademark, but ended up morphing into the personal recording studio that every musician dreams of having.

That's when I resume my compositional tasks and release what's my first studio album: "H.A.L. 9000".  Enthusiastic about pop culture, science fiction, and technology, this first album pays tribute to one of the most iconic computers in Sci-Fi  culture of all time. An L.P. that at no time intended to shade the original soundtrack of "2001, An Odyssey of Space" and in which you begin to observe the glimpses of what will be "The Pyramid" in the future. 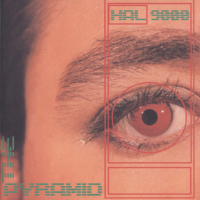 Asin previous cases, the album has minimal media impact, and the discouragement reappears not without   leaving a list of future projects at the bottom of a drawer.

It's about 2014 when I start listening on the big digital platforms, what they presented as a new musical style, the Synthwave; A mix of synths and 80’s nostalgia, seasoned with retro production, colorful neons and video game afternoons. I couldn't believe it, the resemblance to my compositions  was overwhelming. I started looking through the drawers for   my list of forgotten projects that I never finished, and I resumed the synthesizers, although this time they were no longer hardware synthesizers, but virtual instruments, which made it much easier for me to program and edit, in addition to saving both economic and   physical space in the studio.

Something was happening, the melodies were not as before, they were superior, they came out from within me with an energy like never before. Maybe it's the experience, maybe the resting years, maybe now is the time and it wasn't before. "Synthetic" is released 10 years after my first album. To a market that is no longer like before,to a market in which self-provision is being imposed. 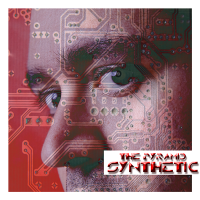 This record is my point of no return, my second chance, my hit on the table. With it I realized that wanting alone depends on whether  you want to. Ten years after my last album I gave the market a new record with 20 new tracks and the best thing is that by its release date I already had more than half of my next project almost finished. The creative drought he believed he hadhas  been largely helped by the current electronic movement. Synthwave has been reborn even in the youngest the taste for electronic music to be heard and not just danced.

It's time to relearn how to sell, get the batteries on social media, and expand your music from your home office to the farthest corners of the planet, which used to be unthinkable. It's time to start receiving new reviews, it's time to get messages from people who just heard your 2009 record and write to tell you that you're "one of the parents of synthwave." It's time to get excited again, to be reborn, to reinvent yourself, to feel the butterflies in your stomach again with every theme you compose, to feel like you're back and this time it's to stay.

But above all, it's time to make your mark on what you love, with you doing it from the depths of you, with your music. We disappear over time, but what about the music? the music does not disappear, the music stays as a witness of your achievements. 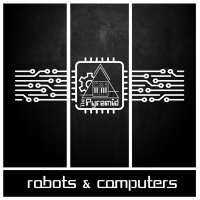 The world is hit by one of the worst viral pests ever known, COVID-19.  The Spanish government confines us to avoid contagion, so it is the excuse for "Robots & Computers", the project that I am most fond of and at the same time more forgotten wasmore than 10 years old. A disc dedicated to the most relevant computers and robots of pop culture and Sci-Fi. And that's when we take advantage of the world standing up and we're realizing how  fragile the human race is, I get to work and finish my last record work. Impeccable production with specially programmed retro sounds, joined by a classic but blunt mix. A sound work to  the  delight of the most electronic and exquisite ears.

I am very proud of the final result of this album, I listen to it and I really enjoy it, but above all I am very proud to see how the work begins to pay off. Listening on digital platforms starts to go up, programs start calling you to echo the launch. All the machinery is tight and starts rolling. I don't know how long this will last, but one thing I'm clear about, I'm going to enjoy it until your last second.

Illusion, commitment, work, goals, footprint, words describing my current day-to-day life. Sit down  and play  my keyboards  behind the window while it's raining outside, reply to an Instagram message from a follower who liked the last video you posted on the networks. It’s an almost mystical experience, it gives you so much that sometimes you forget that the clock keeps running. Knowing that there are people enjoying what so much effort has cost you to translate, is a full payment and an inexplicable satisfaction.

Thank you for valuing me.

Thanks for being there. 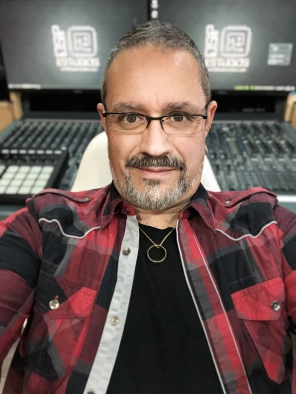